It felt a little like walking onto the set of Sanford and Son at The Shadowbox Theatre last weekend, but aside from being held in a junk shop, Post Productions American Buffalo was the furthest thing from being anything like the 1970s sitcom.

American playwright David Mamet isn’t something new for Post – the company’s very first production ever was Oleanna back in 2017. And just like Oleanna, American Buffalo opened up the senses and pushed the limits of what can be done with a small cast in an intimate setting.

It tells the story of a coin collector who stumbles across a valuable buffalo nickel in a small Chicago junk shop and purchases it for only $90. Later coming to believe that the coin was worth far more than this and feeling he has been unfairly taken advantage of, Donny (Joey Ouellette), the shop owner, becomes determined to steal the coin back. He elicits help from Bobby (Seamus Tokol), a young friend, and Teach (Mark Lefebvre), a paranoid and violent braggart. The three conspirators fancy themselves as businessmen pursuing the legitimate concerns of free enterprise. In reality, however, they are merely small-time crooks, and all of their plotting amounts to nothing in the end. It is a futile, vulgar, verbal exercise that finally erupts in violence when their failure becomes apparent and the frustration becomes unbearable.

The entirety of Mamet’s play is set inside Donny’s resale shop, a beat-up old junk shop with assorted bits of clutter, bric-a-brac and desolate odds and ends. The set was awesomely designed and constructed by Matthew Burgess, who placed the oddest of items throughout the shop. One of the highlights of the set were the handwritten signs taped to the walls.

The three actors are at the heart and soul of this production. Ouellette, Tokol and Lefebvre had a rare chemistry that seemed to work with the pent-up anger that grows through the show. Of all three actors, Lefebvre seems to have the most vivid scene of the entire show when he breaks down and literally tears apart the set – I’ve never actually seen such anger in a show. Mamet would have been proud had he seen it.

Ouellette’s Donny was the central character and the conductor of the insanity that transpired throughout the show. He had to balance between the shady tactics of Bobby and increasing tension with Teach. And it looked like Ouellette loved controlling the action. He actually looked and sounded like the perfect junk shop keeper.

Tokol was a great find to play Bobby. His portrayal was gentle, somber and interesting. He gave the slow-witted and dull character just enough intelligence to pull off his own scheme.

Like most Post Production shows, it was a profound piece that had some deeper meaning. Topics like loyalty, friendship and failure dig deep into the psyche in this one and make you wonder how you would have dealt with the situation. The human mind is not a simple as we’d often wish it was. The character of Teach is a simple example of this. He comes out of the gate with a swag and pageantry that slowly develops into a selfish arrangement of betrayal, anger and collapse. And as such, he’s the perfect Post Production character.

Michael O’Reilly and Michael Potter seem to have a lot of fun directing shows like this and it’s evident in the finer details of the show.

Upcoming productions include a Halloween-themed production that features two locally written plays – A Haunting in E Flat by Joey Ouellette and Autopsy by Alex Monk running from October 5-12 and they close the year with Martin McDonagh’s dark, twisty, and utterly unforgettable masterpiece The Pillowman.

For more on those and other shows, visit www.postproductionswindsor.ca. 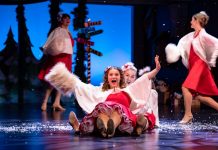 St Clair Christmas Was Great Way To Kick Off The Holidays 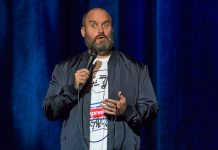 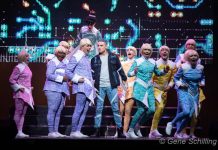 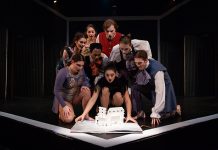 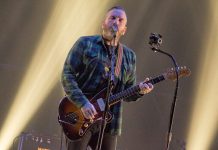